They know the best thing they can say is “I love to watch you play.”

They know the best thing they can say is “I love to watch you play.”

When reviewing the results of an informal survey that lasted three decades, hundreds of 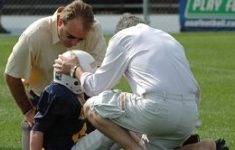 There is a time and a place to go over what went wrong and what went right during the game, but you need to remember that what you say, what you mean, and what your athlete hears can be three very different things. You might think you are being constructive with your critique, but your son/daughter just feels like nothing they do is good enough. Saying “I’m so proud of you,” or “I love to watch you play” is never a bad idea! At the end of the day, most children just want to please their parents so be sure you let them know your love isn’t contingent on them winning!

They let their child play the sport (or other activity) they love.

You might have been a cross country stud in your day, but maybe your child prefers tennis, or karate, or swimming. Or maybe they just don’t like sports all that much and would prefer to just play intramurals for fun. Regardless, the best sports parents understand that their children are their own people, with their own lives and goals and interests. Our job as parents is to support our kids as they do what they love to do. Be there, be supportive, be encouraging, even if it’s a sport you know nothing about. As long as they are happy why does it matter what sport they play?

Your child is not your chance to relive your own athletic glory days, or unmake the mistakes you made. Yes, most five-year-olds aren’t signing themselves up for Little League, but as they get older be sure you are listening to what they want and not just pushing them into what you want.

They cheer on the whole team, not just their child.

Not every parent can make it to every game. That doesn’t mean they aren’t supporting their child, but there might be a sibling with a game of their own, a doctor’s appointment they can’t move one more time, a last-minute work project—life happens! Great sports parents are there to cheer on the whole team, not just their child. If you weren’t there when you son hit a homerun or your daughter scored the game winning goal wouldn’t you want someone to give them a high-five? Do the same for the other kids on your child’s team!

Especially if your child plays a team sport (football, lacrosse, etc.), the success of your child is largely dependent on the whole team! After all, a quarterback can’t score any touchdowns if they don’t have a team of receivers, right? A goalie can make amazing saves, but they can’t exactly play defense and offense from the goal! So cheer on your team, because they are the ones helping your child succeed on the field!

They know when to speak up and when to back down.

One of the hardest things a parent deals with is letting their child fight their own battles. We want to swoop in and fix things and make life a little easier for our kids. But there are some circumstances that our children need to learn to stand on their own two feet. For instance, if they really want to play for a certain travel team it shows immense dedication and courage to walk up to the coach after tryouts and ask “what skills do I need to work on to make the cut?” Yes, you could ask the same question but when the player themselves walks up to the coach it can make a true impression.

On the flip side, there are some circumstances when we as parents need to stand up. If our child is being bullied or intimidated by their teammates or the coach we have the right to get involved. If we suspect even the tiniest bit of verbal, physical, or emotional abuse we have the obligation to report it! Playing sports can help our children learn how to stand on their own two feet, but they are still just kids and some fights they shouldn’t have to handle on their own.